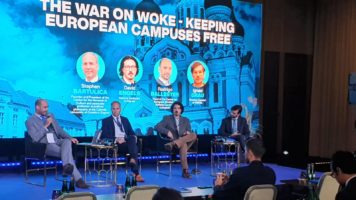 The 51st Human Rights Council took place in Geneva from the 12th of September to the 7th of October where in-person participation of States and civil society has notably increased since the start of the year.

OIDEL contributed to several discussions with oral statements and attended various side events. Both activities are summarised below:

Interactive Dialogue with the Special Rapporteur on Contemporary Forms of Slavery, including its Causes and Consequences, September 15th

In this discussion, OIDEL, through the oral statement of Mayca San Andrés, pointed out that a “quality education” is one that enables children not only to learn work-related skills but helps them to develop holistically as human beings, recognising children’s cultural and spiritual identity.

In the panel discussion on the right of indigenous peoples, Ignasi Grau, on behalf of OIDEL, stressed that the education of indigenous peoples should allow them to be autonomous, but also make them deeply -not superficially- aware of their roots. In that way, they can identify and confront the challenges of their communities.

This oral statement was co-signed by OIEC.

Members of the NGO Platform on the Right to Education met with the newly elected Special Rapporteur on the Right to Education, Farida Shaheed, at the High Commissioner’s Motta Building. This Platform, coordinated by OIDEL, serves to give voice to civil society sensitive to the right to education. The purpose of the meeting was to present the work of the Platform and its members to the new Rapporteur, and to preview the priorities of the Special Rapporteur in the coming years.

During the three weeks of the Human Rights Council session, OIDEL followed the resolutions on “Youth and Human Rights” and “World Programme for Human Rights Education”.