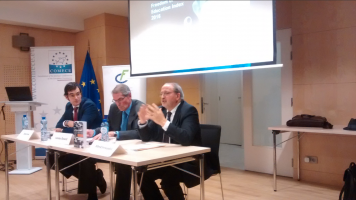 Seminar on education at the Swedish Parliament in Stockholm – 16 November 2016
Since last year there has been a growing debate in Sweden on banning the public funding for religious schools. This debate began when Sweden’s Minister for upper secondary schools (gymnasieminister) told journalists that she intended to initiate a discussion about banning religious schools. The reason was that she had received signals that such schools divided boys and girls. When a journalist asked her about it, she told that this was during physical education. Although this minister has resigned, for reasons not linked with education, the debate has continued among certain groups and certain political parties.
Due to this debate, OIDEL was invited to participate in a seminar at the Swedish Parliament to present the Freedom of Education Index 2016 and provide a broader international perspective to this debate. The event was introduced by the Member of Parliament Tuve Skånberg.
Per Ewert of the Clapham Institute moderated the discussion. Claire de Lavernette – Main representative of OIDEL at United Nations – presented the theoretical framework of the research, underlying that freedom of education is a central element of the right to education in international law. Claire de Lavernette recalls that the obligations of the state include not only the protection of parental and civil society rights, but also the cultural dimension of education. Ignasi Grau – representative of OIDEL at the UN- shared the results of the Freedom of Education Index 2016, showing that almost 75% of the countries provide some kind of funding for non-governmental schools. He only pointed that only 4 states banned explicitly freedom of education: North Korea, Cuba, Libya and Gambia. Luca Volontè – CEO of Novae Terrae- recalled the obligations of Sweden as recognized in the European Convention of Human Rights: “(…) the State shall respect the right of parents to ensure such education and teaching in conformity with their own religious and philosophical convictions.”
After our presentations there were three presentations from Ruth Nordström (Scandinavian Human Rights Lawyers), Sven Magnusson (Swedish Christian School Council) and Professor Reinhold Fahlbeck (Lund University). Sven Magnusson recalled that a requirement that teaching at an independent school shall be non-confessional would not be compatible with Sweden’s international commitments.
After the event, OIDEL participated in an international meeting with school representatives from all across Europe to share with them the most recent United Nations documents concerning education and freedom of education.