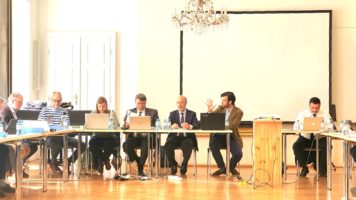 Dialogue with African Ministers – “Education during the pandemic”

COVID has caused the greatest educational crisis that we have known, a crisis for which the world was not prepared. This crisis has put a spotlight on those actors in education who have been forgotten on many occasions: the family, the community, the village. It is important to reflect on these actors who were pillars of education during this crisis to effectively think about its future.

After the opening by Ignasi Grau (OIDEL), Elise Aimé Gonzalez (University of Comillas) led the dialogue. Due to the absence of two main speakers, the ex-minister of education of Central Africa, Charles-Armel DOUBANE, had time to share the Central African experience in depth.

Doubane identified three pillars that guaranteed the continuation of education in Central Africa during the pandemic: institutions (the State acting through teachers and school principals), families, and logistics (the State guaranteeing a protected space for students).

He highlighted the crucial role of the family in education, yet noted that families can only act in their role when the State plays its part as well. For instance, the State should ensure the distribution of books and, in a wider perspective, guarantee a stable income for families, especially during the crisis, so that they can afford to send their children to school.

Within Central African families, women continued to be the primary source of education and care. Consequently, generally speaking, they were more affected by the pandemic than men. The ex-minister acknowledged that women have a difficult task and that they have to be supported by the State and the school system. “Guaranteeing education remains a common struggle”, he noted.

Inquired about the good practices of Central Africa to hold back the widening gap between rich and poor, Doubane admitted that it has not been easy and that, especially the differences in the access to vaccines and respiratory machines, have brought to light a staggering divide. In the future, the State will have to undertake great efforts to reduce that divide that has its effects on education as well. He also highlighted the importance of international collaboration, recalling that we are all part of a global village and that education is our common good.

Once we understand education as our common good, the need for collaboration between regional and international stakeholders becomes obvious. Therefore, the ministry of education of Central Africa is working on augmenting the State budget for education and works closely together with international organisations such as UNESCO.

In closing, and responding to an intervention by the audience, he stressed the responsibility of the State, families, and institutions to guarantee quality education.