Side event “the cultural approach on the right to education”

“Education during the pandemic”, the dialogue with former ministers of Latin America 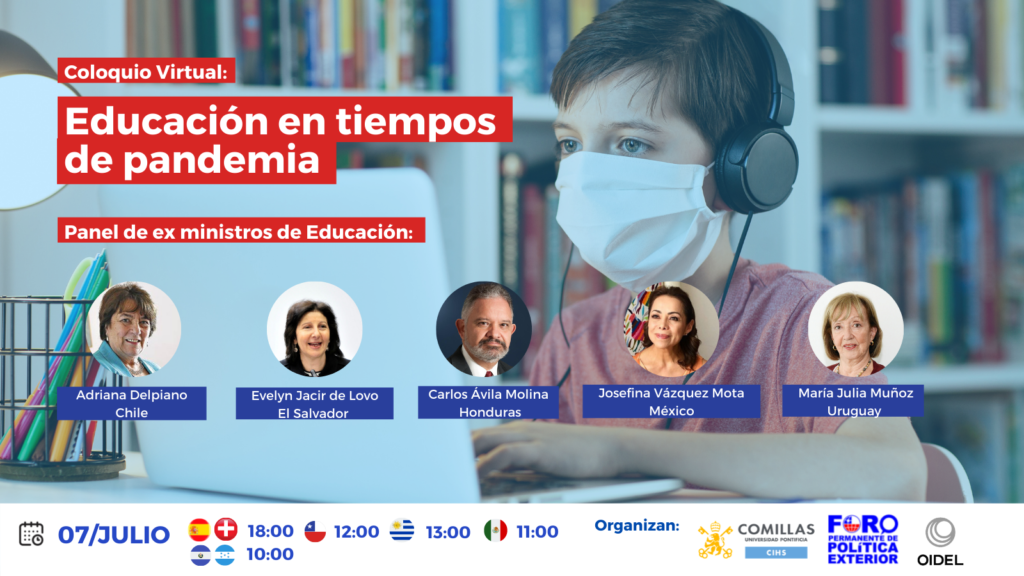 GENEVA (JULY 8, 2021) – Yesterday, July 7th, OIDEL hosted a webinar to propitiate a dialogue on education during the on-going Covid-19 pandemic with former education ministers. The event was hosted by the organization,  in collaboration with the Pontifical University of Comillas and the Permanent Foreign Policy Forum (FPPE).

The event was a dialogue between four former Latin American education ministers: Adriana Delpiano from Chile, Evelyn Jacir de Lovo from El Salvador, Carlos Ávila Molina from Honduras, María Julia Muñoz from Uruguay. The webinar was moderated by Pablo Biderbost and Belén Urosa faculty members from the Pontifical University of Comillas. The session was inaugurated by Ignasi Grau Director of OIDEL and by the Rector of the University, Enrique Sanz.

The speakers created a fruitful dialogue while answering different questions proposed by the moderators in regards with the current state of education in their respective countries and globally. The main topics of their intervention concerned the main actors that have allowed education to remain operating and the challenges they have faced in doing so.  The former ministers also discussed the critical role caregivers in particular mothers have played in ensuring education still takes place during the pandemic. The former ministers also agreed on the fact that education seemed to be the forgotten area in terms of immediate policies. They acknowledge that it was being framed as a long-term problem and was being overlooked for, very needed, immediate measures. The speakers regretted this fact since they consider education a key element that affects many other areas and of which lowering quality will have a devastating long-term effect on society.

Another ongoing theme of the event was recognising the resource gap in most states. And the possible solutions being considered and plans put into action. The dialogue offered an opportunity for attendees to reflect in the challenges and the future of education in the throws of a global crisis. It analysed the factors that made education and pupils suffer more in certain regions and discussed the future in a realistic and informed way.